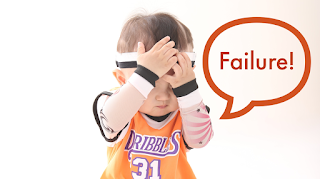 My 6th grade daughter’s lowest grade during the first quarter was in PE. Her mom and I aren't overly concerned with her grade, though, as it was due to her time running the mile. As I sometimes do, I began making connections between her experience and what sometimes happens in classrooms.
Let's first go back in time to our junior high PE days. Imagine the following scenario:
Today, your PE teacher is showing you how to shoot a free throw. When he is done, you will then go to a basket and shoot 10 free throws. Your grade for this assignment will be based on how many shots you make today. There will be little-to-no feedback, and tomorrow you’ll move on to the next lesson. You were shown how to shoot the free throw, so the skill should be learned and proficiency ready to be demonstrated. You may be told mistakes are okay, but your grade is permanent and based on your abilities immediately after the coach’s instruction.
Sounds familiar? Probably so but not from PE class. This scenario likely played out many times in other classes. As a former math teacher, I regrettably admit this was a common experience of my students. I taught the lesson, assigned work, and collected it the next day to be graded - often times without quality feedback. Students who already understood the material or who “learned quicker” received higher scores. Some may have achieved mastery at a later time, but their scores were lower because learning wasn't demonstrated soon enough – according to my pre-determined learning deadlines.
It was also common for me to preach that failure is okay. Afterall, we learn from our failures. However, students would learn that failing too early in the learning process meant lower grades.
Failure wasn't really okay, and I failed to recognize my responsibility in providing feedback in a timely manner.
I could’ve been better, and my students deserved better from me. At that time, grades weren’t about the learning. Grading was done because…well…that’s just a part of school. And feedback? That takes too much time.
I recently read Making Assessment Work: For Educators Who Hate Data but Love Kids by David Schmittou. In that book, he says:

“If a kid shows today that they can earn a higher grade than they earned three weeks ago, change it. This just shows that you did an excellent job of teaching and inspiring hope. It is not an indictment of the kid. It’s a celebration of your ability to teach.”

May our practices demonstrate we value mistakes and feedback more than grades and pre-determined learning deadlines. By truly rewarding mastery, and the path to get there, we can inspire hope by sending the message that learning is the ultimate treasure.
Doug Dunn is currently athletic director and junior high principal for the Licking (MO) School District. He has previously served as a K-8 superintendent and elementary principal. Doug can be found on Twitter at DougDunnEdS.