"Aunt Bee, Call the Man." I can still hear a former principal referencing The Andy Griffith Show as he gave me advice about calling parents. Calling home was something that was terrifying as a young educator. The reaction I anticipated when delivering news about a child's behavior caused me to neglect this very important aspect of my responsibilities.

I soon discovered that parents were generally much more supportive than I had given them credit for. Calling home when students are struggling in class, whether that struggle is academic or behavioral, is an extremely critical but often underutilized strategy for educators. However, the purpose of this post isn't to convince anybody to call home when we need home's assistance. We already know we should.

One of the greatest things we can do as educators is to call home when we observe something positive from a student. Not only can these phone calls help build positive rapport with parents and potentially minimize negative behaviors on the front end, but they can also be effective in building positive student-teacher relationships. (According to John Hattie's Visible Learning research, positive student-teacher relationships is one of the most impactful strategies we can utilize in raising student achievement with an effect size of 0.52.) 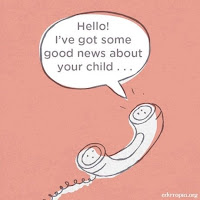 As a principal, I began making a #GoodNewsCalloftheDay several years ago. With the help of staff, we would identify a student who deserved a positive call home. That student would then come to my office and listen as I put their parent or guardian on speakerphone while delivering great news. This eventually transformed into handing out Good News Call of the Day bracelets for each student who received a good news call home.

We may never truly understand the impact of such a small, simple gesture. I recall one student I brought to my office one day for a positive call. We each grew disappointed as I exhausted every phone number we had on file for her parents. Determined for somebody to hear her good news while she was in my office, I called grandpa. I've experienced countless numbers of smiles and tears with these good news calls home, but this one stands out above them all. Words cannot express the excitement heard in grandpa's voice and the smile seen on his little girl. What I didn't know until some time later was that grandpa was battling cancer and didn't have much time left before his passing. The family later shared the impact of that phone call. One of this man's last days on earth involved hearing great news about his granddaughter.

Positive communication home doesn't always have to involve a phone call. Emails can be effective, but a handwritten note can be powerful. One year I made a point to send a handwritten note to the parents of one student in each of my classes every week of the year. This definitely took time as I personally wrote, addressed, sealed, and stamped each of these. The impact this had on a particular family made all those hours worth it.

One of my student's parents (I'll call him David) had recently taken in a young man who needed a family and a place to live. They didn't have to, but they gave him a loving home and treated him as if he was their own. I was deeply moved by this. I hadn't written a note to David's parents yet, so this was a great opportunity to do so. That note stayed on their refrigerator for years. I know this because every time I saw David's dad he would tell me. He would also express how much that note had meant to him.

How powerful was that handwritten note? Consider that just a year or so before David's dad had threatened to physically harm me one afternoon over the phone. Already frustrated with the lack of playing time I was giving David on the basketball team, his dad felt I was picking on his son after confiscating his cell phone three times in one semester. This resulted in him calling the school one day and making the threats. That handwritten note resulted in an amazing transformation of a relationship. That family went from wanting nothing to do with me to highly respecting me. Years later after David had graduated from high school, I saw him in the local Wal-mart. He thanked me for everything I had taught him in math class and said I was the best math teacher he ever had. Relationships matter!

I will never profess to being the greatest at building relationships or finding the positives in staff and students. This is something I must continually work on every day. Finding the positive is a mindset. For me, it sometimes has to be intentional. I often get so caught up in trying to grow and be better that I overlook the good that's right in front of me.

Hawk Nelson, a contemporary Christian artist, has a line in a song which says "You're gonna find the good if you're good at looking." My challenge to every educator (and myself) is to work on becoming good at looking for the good.  And when we find the good, let's be sure to communicate it. Our colleagues need to hear this. So do our students and their families.

Imagine how a school culture could be transformed if every person in the building was intentional with finding and sharing the good in others! 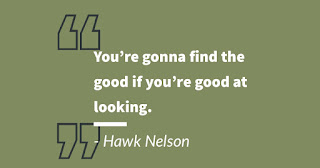 Doug Dunn is superintendent and principal of a small K-8 school in rural, south central Missouri. He can be found on Twitter at DougDunnEdS.